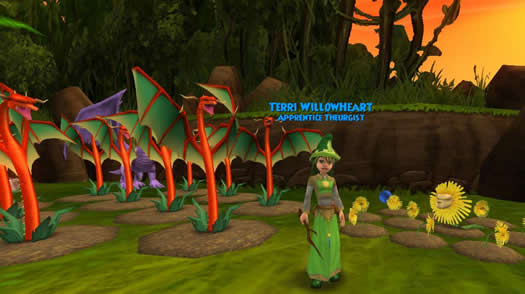 Who knew it would be so soon that I could begin sharing my findings? Savvy has been busy combating evil in Mirage and playing with the new housing magic in our castle, so I get to fill in for her until she is ready to resume her posts! Yay me!

Ok so at first I was going to pick a random plant to start with, but which one?? So many choices! Granted I only have one plant that I have completely finished Phase One of my experiments. Phase One, you ask? Exactly. I decided instead that maybe I should explain exactly what I have been experimenting with. It is a daunting project, I must say.

My goal is to be able to give a definitive answer as to what plant is absolutely best to plant for specific items. You need water lilies? OK, bad example, kinda. I don't actually have any data yet on plants that give water lilies BUT I can suggest you plant Dandelions. Dandelions are EASY to take care of. Their gardening cycle only takes around 7 days to get to elder harvest. Ten dandelion plants yielded 40 cat tails in one week. Imagine if you planted an entire large plot of Dandelions! You'd quickly be able to transmute those cat tails into all of the water lilies that your little heart could desire.

Why do I only have information for 10 plants at a time? I wanted to be fair to all plants, so they could be compared. Sure, I could fit 70 or more small plants into a large plot and then compare it to the 12 large plants that I can fit into a large plot. That doesn't hardly seem fair, and yet it kinda does. Coming up with 70 or so seeds to plant requires way more patience than I'm willing to have right now too, not to mention space! So I decided on a nice round 10 plants to start out with.

I mean, let's face it. Some plants are more about decoration than harvesting anything useful from them. At first, I was only going to experiment with plants that give reagents. Our main focus here at Castle of Crafts IS crafting after all. However, seeds have become necessary ingredients themselves for some recipes, pet snacks too. Plus, harvesting mega snacks from your garden is just AWESOME and so so handy! So Phase One of my experiments is 10 plants, with nothing near them they like nor dislike. Once I get a grasp of WHICH plants are worth the effort of collecting seeds, growing larger plots, and gathering information on, those plants will progress to Phase Two.

I also had some difficulty in choosing if I should group findings by how many days or how many cycles? It would be handy to know "OK, I can get approximately 164 cat tails from 10 dandelion plants in 30 days." But for so many plants 30 days isn't really enough time to grow 2 cycles even. The Deadly Ninja Fig takes around 32 days for their first Elder harvest. So again, is it fair to compare one cycle of one plant to ten cycles of another? I mean the elder harvest is generally THE best. But maybe you are crunched for time and want those reagents ASAP and would rather have in the information in terms of days instead of cycles. Never fear though, since I could see the argument for both, I decided to track information both ways!

Make sense? I hope so, it usually does in my head but not so much once I start spewing forth words in a single long stream because I'm just SO excited to get this chance to finally share my findings without someone other than Dezzy! (Love ya Dezzy, you know I do but I've seen your eyes glaze over a time or two while I'm talking about gardening.) Next time we meet, I will pick an actual plant to showcase and give ya'll an idea of exactly what I'm striving for.