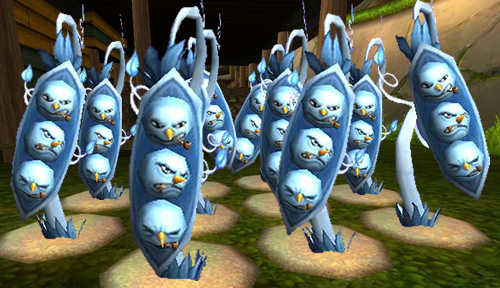 Welcome back to Terri's Garden! I debated and argued with myself trying to figure out which plant to start with. There are so many AWESOME plants! Flowers that give reagents, veggies that produce treasure cards, many even give mega snacks, housing items, or PETS! How to choose? OMG it was so hard. Finally I said to myself, "Myself, there is only one plant that you can confidently predict what crafters can expect to get from harvests. It is the only plant that you've completed a full 10 harvests for a decent sample." Myself thought for a minute and then whined "But Evil Snow Peas are boring, and basically pointless unless you're an Ice wizard!" So I did some research to prove Myself wrong.

And you know what? That assumption IS wrong! Granted, Ice wizards will benefit greatly from growing Evil Snow Peas, especially little wizards. Not only does this plant produce Iceblades, but several other Treasure Cards of various Ice spells. They aren't hard to take care of, which is why they are the first plants that I managed to finish. Ice wizards don't even get their Iceblade spell until level 38 so having Treasure Cards of it would be the bomb-diggity. But there's more.

Before I get ahead of myself, let me give you some details. On average, it took this plant 4.9 days to grow from planting to elder harvest. Based on my findings so far, the average cycle - growing 10 plants at a time - can produce the following:

Evil Snow Peas can help you make a total of 172 different recipes. I'm serious! Dezzy tells me there are 100 different clothing recipes that use either Evil Snowman, Iceblade, Snow Shield, Tower Shields, or Frost Flower. Savvy revealed that 33 different housing recipes require ingredients that can be harvested from this plant. Even one of the pogo stick mounts uses Snow Shields in its recipe. Frost Flowers alone are in tons of recipes that aren't just for ice wizards. Digby pointed out that you can also use Frost Flowers to transmute Grendleweed, which can be hard to come by otherwise. Emma's input was that 2 different gem recipes could benefit from this plant, which can produce 12 different gems. There are also 5 wands, 3 amulets, 2 rings and an athame that use at least one of these harvested items.

Sooo, don't underestimate this seemingly unimportant plant. If you are interested in Gardening for Reagents, you just may want to give Evil Snow Peas a second look.