Have you been keeping up with your crafting quests? Just a friendly reminder since you will need to be a Master Artisan crafter in order to craft the Dragonspyre gear. Drop in and purchase your recipes from Roanna Sorrowscale just as soon as can. She can be found in Dragonspyre Academy, between the Basilica portal and the drake that takes you to The Great Spyre.

To make all 3 items in this outfit, you are going to need to collect 25 Humongofrog treasure cards. It seems to be the norm to expect that you will need 63 ore for all of the clothing sets here in Dragonspyre. The remainder of the ingredients are simple to come by for the amounts required. Just click on the set title to view the full list of ingredients needed to make the entire set: the hat, robe, and boots.

Myth wizards get a nice accuracy boost with all of the Dragonspyre gear. Sure will help out that Humongofrog spell which can be frustrating with its seemingly high fizzle rate. I love being Myth, I really do, especially now that monstrology lets us call many minions. But, as I'm sure you've heard me say before, the dye shop has practically become my second home. I just wish the crafted gear's default color was the Myth blue instead of that bright yellow!

That's some impressive accuracy boosts for both schools for Myth/Storm wizards. Not much of a damage boost for Storm though, I'm afraid to say. You can always add gems to your other gear though, if needed. Circle sockets for damage are much easier to come by than triangles for accuracy gems.

Myth/Fire wizards are given a pretty decent outfit here, over all. The boosts are decent all around and the fashion style doesn't want to make you want to poke your eyes out. Course, that much yellow might make you go blind anyhow.

This is a serious outfit for serious wizards. I say this not only because of the militant design but also because of the incredible boosts for accuracy and damage to both schools. I think Myth/Ice wizards probably have the best outfit in Dragonspyre, hands down.

Myth/Death wizards are also given nice gear in Dragonspyre. Not only are the boosts decent but it looks pretty sharp too. Love the cape, how can you not feel like a superhero when you have a cape like that?

WOW! I can't believe I can still squeeze into my Dragonspyre gear! Hard to remember being so little LOL! So not a fan of this hat. I call it "The dragon chew toy hat". I could have sworn that I had stitched mine and yet here it is on my head. At least the boosts aren't half bad for Myth/Life wizards. 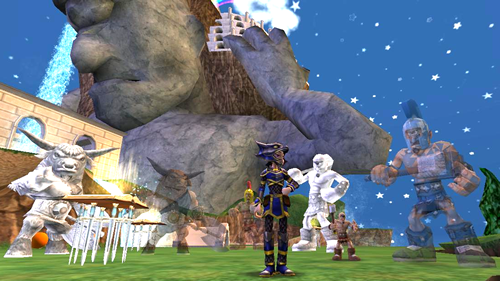 Please keep in mind that the numbers above reflect the properties given when the entire set is worn together. I have provided a link to the Dezzy's Closet page of our website that gives the clothing recipe and info for the sets, and the names of the individual items that make up the sets - just click on the set title. These pages are not yet available through our site but I have given exclusive early access to our blog readers!