Week 4 Quest with Us and HALLOWEEN STUFFS! 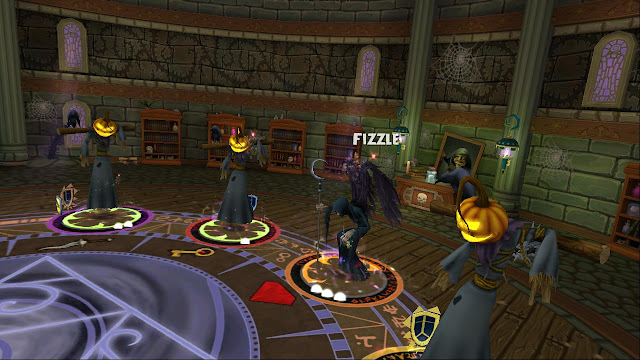 The group finds its way to Nightshade. Perfect timing for holiday farming! I'm getting a costume from Nightshade this year!!

Open invitation to quest with Edward Lifegem from Around the Spiral and Autumn Dreamwalker from Secrets of the Spiral. The concept is simple - little wizards gathering to quest together. Quick synopsis: We have finished Wizard City!

I never realized how LONG Crab Alley is. The first hour was fairly enjoyable. I think the first hour is always my favorite because the group is still together and the quicker wizards haven't had much chance to speed ahead yet.

As long as Crab Alley is, I really don't have much to comment on it. There is a lot of back and forth with grabby creatures. In my opinion the area is just a means to an end - you need to do it if you want access to Waterworks later.

The group has started referring to the Twitch stream as a river. But this was not my experience last night. I'm not sure what my issue was but Twitch didn't want to work on any device at all. Instead of a river or stream I was stuck behind a huge beaver dam waiting for a trickle. Ironic since we were underwater all night LOL. In fact, I think there was another group photo in Krokotopia that I missed out on. I kind of heard a couple of words about it here and there but I was still battling those dang eels in the Deep Warrens anyhow. I was a true fizzle wiz last night but I suppose it makes sense that fire spells wouldn't work well underwater!

Are you aware that Edward and Autumn do a random stream on Sundays? This coming Sunday the group will be doing the Halloween quests! Come join us! As stated, I didn't manage to catch many details from Twitch and I would bet we're skipping the Trick or Treating, but on second thought wouldn't those be necessary in order to do the Ravenwood Halloween dungeons? Fairly sure Nosferabbit is in the plans though! 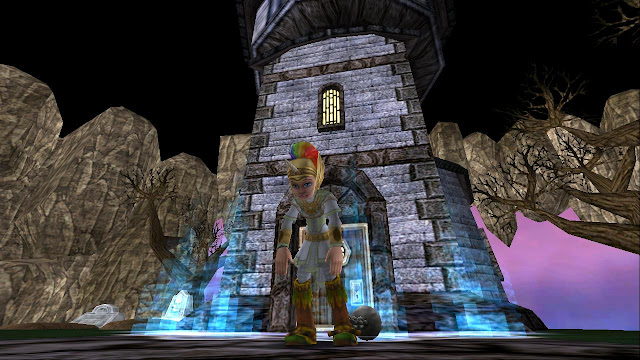 Don't let the new gear fool you, that is ME! I have chained myself to Stormdrain Tower determined to get a costume dropped for the annual Halloween run which has been announced for October 28th at 1pm. There's a seriously huge raffle. Check out Around the Spiral for details!

I was amazed to learn that many wizards don't know about the Plethora of holiday items that Ol' Nightshade drops! I mean, OMG! Mummy costume, Vampire Costume, Ninja pig, the Halloween set (much better looking on dudes IMHO), pets that are only dropped during Halloween, and holiday housing! That's only a partial list off the top of my head! While you can get some of these things from other bosses, Lord Nightshade has the longest list of holiday goodies - plus I believe he is in a free to play area? I could be wrong about that. Anyhow, here is a link to Nightshade's drop list, and I managed to wrangle a list of 20 bosses from Windbreaker that can drop Halloween items!

Dezzy has our site decorated for Halloween with special header pictures. My What Shall We Do Today? page directs you to traditional Halloween creatures in the spiral every day in my daily challenge. We're talking Vampires, Ghosts, Goblins - and sometimes just people that sound like Halloween candy! Today I'm sending big wizards to fight Taffy, for example LOL. And don't forget to do your Gravulum assignments. You can also get Halloween goodies from those reward chests as well! I really should have planned our own event for this, but as usual I was too busy enjoying all of the birthday events to even think about it. How I can look forward to other people's events and not even register that I ought to think of one, I will never know LOL.

Posted by Scarlet Fairysinger at 4:56 PM