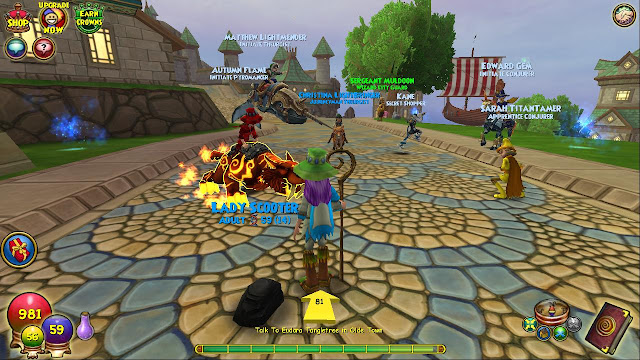 The group gathers in front of Cyclops Lane and prepares for some hard core questing.

Open invitation to quest with Edward Lifegem from Around the Spiral and Autumn Dreamwalker from Secrets of the Spiral. The concept is simple - little wizards gathering to quest together. I think there are a total of 10 people in our group. I've never taken a head count, I guess maybe I should LOL. 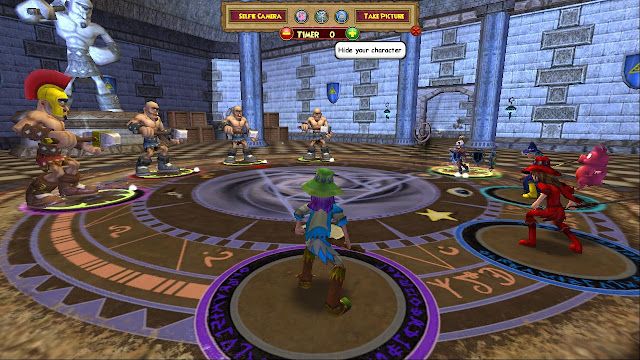 Here we are at the end of Cyclops Lane. It really did go that quick. Preparing to start, blink your eye, and we've powered through Cyclops lane mainline quests - even the infamous and humilitaing fetching of Cyrus' laundry. With a large group, we had one person posted at this place, another positioned there, so all we had to do was port to people and save the time running to each place and reduce the risk of someone getting caught in an unwanted battle. A real time saver.

I swear I WILL get the hang of photomancy yet! It's a good thing that I accidently took this screenshot while trying to use the photomancy interface because I ended up in active battle before getting my picture - and apparently you can't use photomancy during battle. Makes sense I guess, but I often WANT battle pictures lol.

One fun thing to note, is that while we were trying to obtain the necessary pass from Warhorns, Victoria entertained us with the history of the migration of the Warhorns. Though it took some of us several battles to find what we were looking for, we were well entertained and spirits remained positive!

Cyclops was our final mandatory street. After fighting all the bosses on each of Triton, Firecat, and Cyclops; Ambrose sends us face Foulgaze. I'm afraid I didn't get a picture of this and I ended up in some horrific wormhole when I tried to leave Foulgaze's tower. God love 'em, I could hear Edward and Autumn on the stream wondering why I had left chat and was no longer showing on friend lists. I really need to get around to creating a Twitch account so that I can comment in chat there. When I finally reappeared with the group I was behind and would be scrambling to keep up for the rest of the evening. 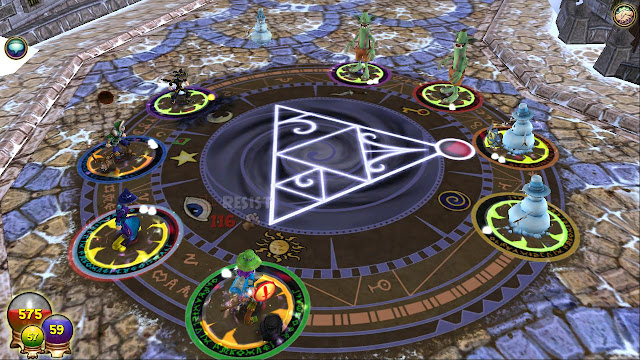 Colossus Boulevard, where the Gobblers and Evil Snowmen never seem to end. Above was one of the few battles that I was with the group. Even then, it turned out that I was still working on four gobblers and four evil snowmen while the others were battling 2 of each gobbler type.

Now being able to port to people instead of running is amazing - when you aren't behind the group. They continued to progress quickly while I was left to run back to Ambrose, Mindy, and I think there may have been a trip to Timbuktu thrown in for good measures. The evil snowmen are truly evil and kept spamming fire shields which just did me in. I ended up "cheating" and hollering for Dezzy to come give me a hand. Her frog made quick work of the gobblers and barons - plus she got to collect gobbler animus so it was a win win for us both. Somehow, I managed to finish with the group. When I ported for the final group picture the Gobbler King was willing to speak to me and I realized that I was done! Thanks again Dezzy! 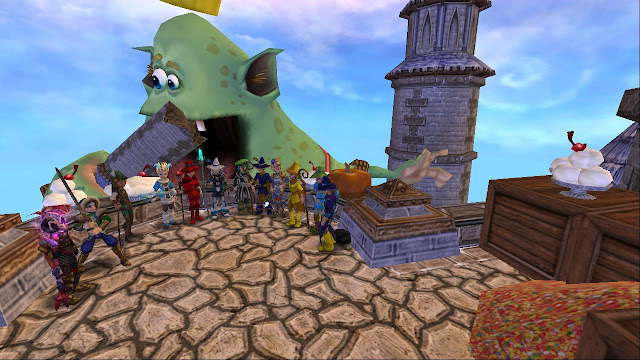 Again this week, our "homework" is to finish the side quests on our own. This is very important though because next week we will be sliding down the anchor rope to Crab Alley, and you must be level 12 to receive this quest! So iffin there is anyone who wants to join us, we have completed all of Wizard City - EXCEPT Crab Alley and Nightshade. Best for last hehe.

Posted by Scarlet Fairysinger at 6:55 PM