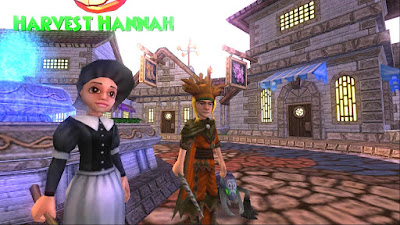 Found her! Does that mean I get to take the rest of the day off? NO?! Aww mannn. Harvest Hannah is easy to find obviously, even I could do it. She is in the Shopping District of Wizard City, by the fountain heading towards Elik's Edge. What isn't so easy to find, however, is the stuff that she sells, without spending your hard earned crowns. But fear not, I have some handy tips for you.

When it comes to holiday gear, Nightshade is almost always your best bet. He drops prolly close to 90% of all the holiday goodies. Nightshade can be a stingy old thing but does have all 3 items of the Pilgrim outfit, plus the Turkey Hat and an assortment of fall themed wands. If you are looking for higher level holiday wands - or a challenge - you'll want to branch out a bit. There also are a few things that Nightshade doesn't drop, but other critters do.

Your second best bet, if you are high enough level, is Mirror Lake in Zafaria. There are three different battles there that can net you holiday stuffs. Tse-tse Snaketail might can produce a couple of wands for wizards level 65 or higher. The Elephant Spectral Guardian not only drops those same wands but is the only creature known to drop the Indian Headdress. The Starburst Spider could possibly drop the entire set of Pilgrim clothes, though only the hat and boots have been confirmed so far.

There isn't a whoole lot of hunting opportunity for fall items, but hunting is pretty much my thing here in Hunter's Lair. Jade Oni is also known to drop fall wands for the midlevel wizard, Astraeus and Ptolemos can both be found in the Trial of the Spheres in Celestia and could give you a wand or two. There is also Othin Stormfather rounding out my list. I think Othin often gets overlooked when it comes to holiday farming. He actually provides quite a bit of holiday goodies, including the Turkey Hat. You remember Othin, he's the final boss in Ravenscar, Grizzleheim. Yeah, THAT guy. I knew you remembered him.

One final bit of advice. I wouldn't entirely rule out Krokopatra, Meowiarty, Malistaire - both Dragonspyre and Azteca versions, or Skurkis Screaming Moon. These bosses are known to drop other holiday gear and could possibly have fall stuff too but just more stingy so it hasn't been confirmed. We had no clue that Meowiarty dropped the Ninja Pig Hat, it hadn't been reported anywhere that I'm aware of. Yet he gave one to Ghost when she was rescuing Marleybone from his evil clutches and just happened to be during the Halloween event.