Those of you who have found your way to the test realm may be aware of the news! There has been an outcry from the wizarding community about the fact that we are way overdue for some new crafted gear. Our pleas have been heard - though this is not exactly what we may have had in mind, I am hopeful that it is a precursor for goodness to come. Nope. I'm actually not talking about the new level 120+ gear offered in Empyrea. I'm talking about level 50+ gear that offers healing properties. What?? I know, I know, you think I'm joking right? Unfortunately I didn't get a pic any of the Healer's gear. I had wanted to check out Empyrea and thought there would be plenty of time! But let me start at the beginning.

For a brief period of time, Ignus Ferric, the Fire school teacher in the Arcanum, was showing ALL of the crafted recipes. Those who had the patience to scroll past the first 9 pages got a peek at the Duelist's set. I'm not quite sure if it is the full 42 separate sets to represent an outfit for each school AND secondary school combination. But I do know that there were a ton. There was also Healer's set of clothing which I only got a peek at around page TWENTY of just the hat recipes. Around page 40, there was a third grouping of clothing too, that I'm afraid I don't even recall what it was called.

The premise is similar to Aquila gear, but instead of taking a dropped item, adding ridiculous amounts of reagents and receiving little difference to the properties of your gear; this takes the clothing that you crafted for Dragonspyre and add reasonable amounts of reagents and badabing badaboom. New and improved gear! Here's a screenshot of Rainy Veil of the Lacuna from Dezzy's Closet: 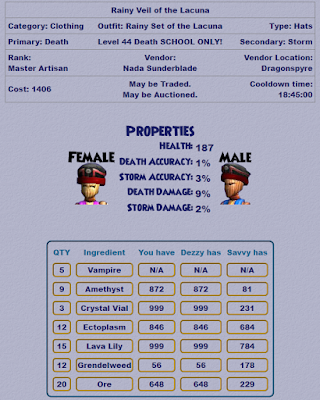 Now, here's a picture I found on my phone of the new recipe called Duelist's Banestorm Hood that upgrades the Rainy Veil of the Lacuna: 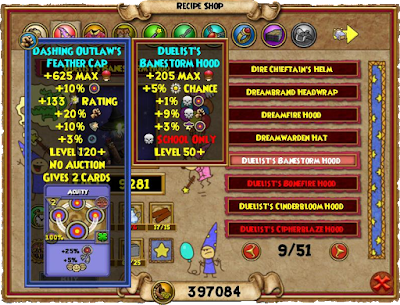 Granted, you lose that whopping 2% damage to secondary Storm school spells to gain 5% pip chance. You can't really see the required reagents, but I had most of them in my backpack just from picking them up in my travels since the last time I dumped my reagents into my storage chest. I can't recall if the Healer's gear gave incoming or outgoing - I doubt both, let's not get crazy now. This can be a win-win situation though if you are level 50 and had already crafted your Dragonspyre gear, cuz let's face it. In only 6 more levels you're going to be blazing a trail to Sudrilund for the crafted gear there. IF you don't already have it crafted and hanging on a mannequin.

I know, we have crafted gear at levels 44, 55, and 56 so you're asking yourself "Why is Dezzy getting so worked up over this new gear that she can't even wear?" I don't know what excited me the most, the new opportunities that this gives to new wizards. There have been so many changes and improvements since I was level 50 - and I didn't even know about crafting yet at that level! But honestly, I think what has me bouncing off the walls is the hope of more of these upgrades to come, for higher levels. *Fingers, eyes, and toes crossed*

Since I JUST finished covering the Dragonspyre crafted gear, I had really really hoped to be able to just slide right into specifics and start a feature of the new clothes this month. But I have scoured Dragonspyre looking for where to find these new recipes and have had no luck! I even peeked into the Labyrinth, Dragon's Maw, and Howling Cave. Unless the new crafter is hanging out with Old Malistaire himself, I have run out of places to look. And that is quite actually possible, I mean Master Yan Kan Kook is chilling with the Plague Oni and Grady is lurking behind the Indigo Giant, so maybe, I suppose, I'll have to go see what Malistaire is up to one of these days. See if he is playing host to a newcomer to The Spiral.

Hopefully by this time next month, I'll have located the recipe vendor, given them time to make sure their recipes are set and ready to go, and can bring you my first feature piece on the new gear, comparing it to the old gear. Kinda like I did with the Aquila gear.