You may have noticed that I've been absent from blogging lately. In case that you actually missed me, I thought I would at least fill everyone in on what I have been up to.

Zafaria Clothing! UGH and double UGH! Since starting this series I have been dreading when we made it to Zafaria and sadly I am no more prepared for it now than I was 3 years ago. I have misplaced or sold most of the clothing that I used to take the individual pictures. Manny and Mandy have been in hiding because even THEY know that the clothing they are going to be sporting are mismatched and funky looking.

I used to curse the day that Koyate Ghostmane was born. His clothing is just so unorganized and mismatched and makes no sense. But as I dig into the clothing options offered in Zafaria, I feel bad for the guy. No wonder he is so overwhelmed. He is the only crafting vendor in the Spiral that handles EVERYTHING - hats, robes, boots, athames, amulets, rings, and even wall hangings and decoration recipes! Plus, standing next to him, I look very tiny. I don't think I want to upset the giant kitty!

If his overabundance of stuff wasn't enough to deal with, the poor dude had been robbed by Inzinzebu Bandits and needed my help getting his items back. I suppose he has good reason to be a bit disorganized with his clothing. Except he hasn't been any better with his organizational skills than I have. Seriously, he just stands there all day while I'm off saving the Spiral - and building bridges, fixing fences, delivering messages, picking up Drake's laundry, impersonating entertainers, and, and, and ... the list goes on and on! *Sigh* a wizard's work is never done.

In addition to this list of wizarding work, I have begun sorting the Zafaria crafted clothing into possible outfits. I plan to start with balance since it is first alphabetically. Did you know that there are 52 different combinations available to Balance wizards in Zafaria?! That is just hat, robes, and boots. I'm afraid it is going to take me a little while to assemble the clothing, corner the Quinn Twins into several photo shoots and clothing changes, and then edit the plethora of resulting pictures.

Did I mention that I also need to rethink how I'm going to combine, display, and compare the different items into assorted complete sets. I AM working on it, it is just taking longer than hoped. I have some very exciting ideas for it though! Below is a quick montage of the initial clothing groupings. 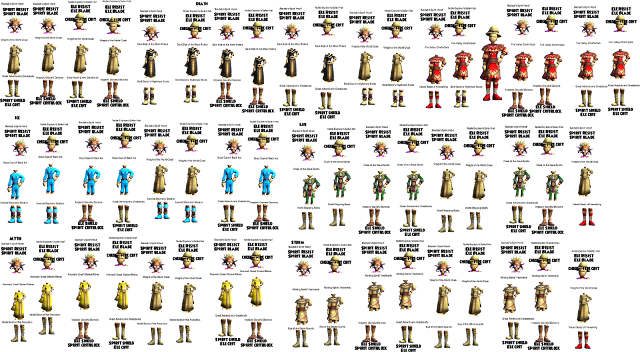