These are the last of the Dragonspyre crafted clothing outfits to be found here in Dezzy's Closet. You would think that Dragonspyre would favor Fire wizards, but this is not the case. Wizards that have chosen Fire spells as their primary school are the last wizards to reach their vendor in the Drake Hatchery. Most likely, wizards that have done their side quests will be well above level 44 when they reach this area.

You'll find Anilla Firemantle across the street from the Teleporter hub and I strongly suggest you stop and talk to her as you run by, if you haven't already. Look below! I actually have a map for her :) 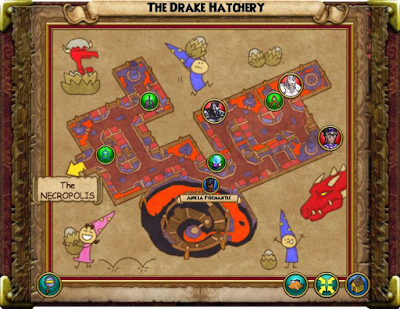 To make all 3 items in this outfit, you are going to need to collect 24 Meteor Strike treasure cards. It seems to be the norm to expect that you will need 63 ore for all of the clothing sets here in Dragonspyre. The remainder of the ingredients are simple to come by for the amounts required. Just click on the set title to view the full list of ingredients needed to make the entire set: the hat, robe, and boots.

Accuracy boosts for the Fire/Balance combination leave a bit to be desired, but the damage boosts sure are nice. The style of this outfit isn't bad - except for that hat of course. Maybe I'm just not a hat person, there aren't too many found within the spiral that I actually like.

Fire/Storm wizards experience some give and take with this outfit. The accuracy boost to secondary Storm spells are amazing and much needed, but the damage boost to Storm spells is the lowest to be found in Dragonspyre crafted clothing. Primary school Fire spells get nice boosts to both accuracy and damage though. I would probably wear this hat, depends on how it made my hair look though I guess. That's kinda hard to tell with Mandy and Manny wearing them.

I bet the Fire/Life combination would prove to be interesting. Especially if crafted clothing catered to the healing aspect of Life spells more. The accuracy boosts to be found here aren't the greatest but you can't complain about the damage boosts to both schools. I'm totally ignoring that hat and am thankful this is the last week that I'll be looking at it for a while.

Whoa! This is one of the best sets we will see here in Dragonspyre. What's up with that 25% damage boost to a secondary school? Very nice! Even the accuracy boost to the Ice spells are better than many we have seen in this world. And, it's not even embarrassing to be seen wearing ;)

Another sharp looking outfit, which I have probably said before. But c'mon now, it's got a cape, how can I not comment on that fact? Fire/Death wizards also receive very nice damage boosts but not a whole lot of help with accuracy.

And our very last outfit to examine in Dragonspyre crafted clothing. Yeah, I didn't save the best for last - but it's also not the worst. Wizards that have chosen the Fire/Myth combination of schools get a middle of the road approach to they Myth school spells. Not horrible, but could be better. But on a good note, this is one of the few schools with Myth as the secondary spell set that doesn't have the dragon chew toy helmet. Gotta look for the silver lining.


Please keep in mind that the numbers above reflect the properties given when the entire set is worn together. I have provided a link to the Dezzy's Closet page of our website that gives the clothing recipe and info for the sets, and the names of the individual items that make up the sets - just click on the set title. These pages are not yet available through our site but I have given exclusive early access to our blog readers!