I had a bit of a surprise when I started my research for this post. The majority of the people that drop these Treasure Cards are nonrepeatable bosses that you encounter during the quest for your minion at level 75. The good news though is that everyone else that drops these cards also drop a variety of farmable stuff - pets, school themed gear, decent pet snacks, etc.

There are three "hidden" bosses in the Tree of Life. This is where you will find Youkai. He is the only repeatable boss that drops the Triton Treasure Card. He is in the furthest house, which I've marked on the map below for you: 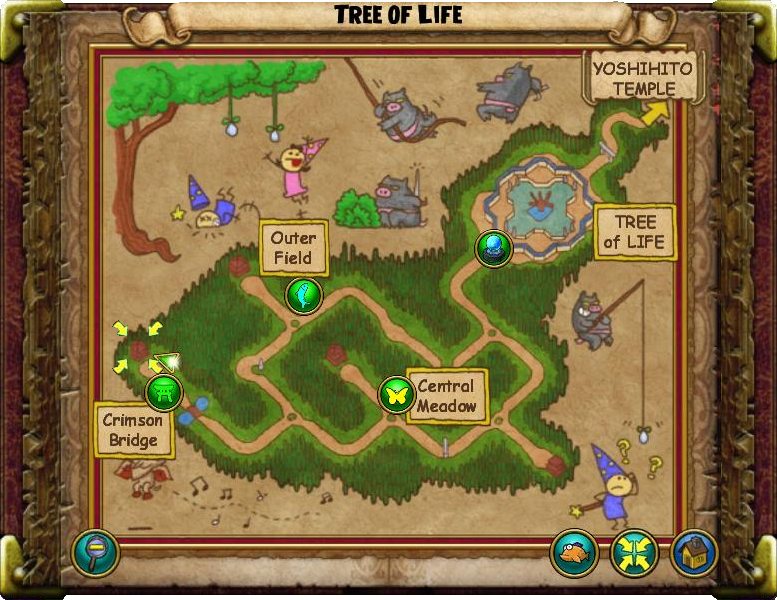 Granted it is a bit of a hoof to get to him, but well worth the effort. He drops crown gear, the Minotaur Pet, Wooden Skeleton Keys, exclusive houseing, and a total of 11 hats, robes, and boots bearing school symbols that are exclusive to him for the most part.

I have slightly better news regarding Stormzilla. There are 7 repeatable bosses that drop this Treasure Card, including our old friend, Jade Oni. I might have to pick him as my favorite right now, since he is also currently dropping items that can only be received during the Springtime Festival. If you are under level 50 you might even be able to coax a permanent Storm Rider Hare mount out of him.